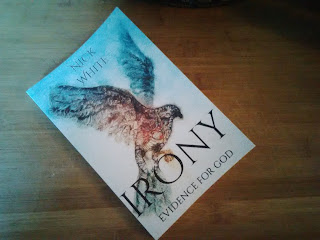 “We’re living in strange times.” It was an offhand remark to the electrician as he came to assess a broken cooker. We had been talking about politics. It seemed like a safe, anodyne remark, unlikely to cause offense or to alienate. And maybe it was ironic.

But it’s true – we are living in strange times. Perhaps the times have always been strange, but they are no less strange today than they were before. This world of alternative facts and fake news has driven many of us to the edge of our resources. All kinds of things that we used to take for granted now have to be fought for. It’s partly the fault of the citizen journalists but it’s also true that alternative facts and fake news are not new.

We can say we are post-truth and post-irony and that we are far too sophisticated to accept old dogmas, but there is still that longing for some kind of meaning to it all, some kind of certainty. For some kind of pragmatic way of survival in this strange world. And that is partly why I have written my new book, released today.

It is a non-fiction book which takes an original look at irony in our modern lives. It is a book which extends the definition of irony in line with our modern understanding of the term. And it is written for people who blame God when things go wrong. It’s for the agnostics, for the people who wonder why the believers and atheists are so loud. I make some wild claims in this book. I say that irony needs there to be a story. That it needs there to be an audience. That it implies an ironist in the same way that a story implies a storyteller. But what would the nature of such an ironist be, given the nature of the ironies which we are subject to?

Would it be ironic for there to appear to be patterns in both our lives and in the story of history or in our meta-narratives, stories like the Gospels, Frankenstein or 1984? Or are such things evolutionary survival mechanisms, like the formulation of language or the willingness to arrange our lives into some kind of meaningful story? What is the point of the sword which is irony? Why is it there?

I invite you to read my book as it is written for thinking people like you. People who seek meaning. 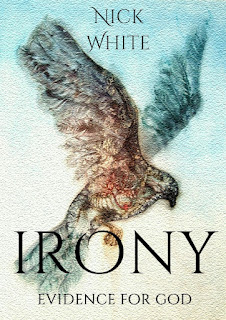 My first non-fiction book 'Irony - Evidence for God' will be published soon so it seems right to blog about that.

Of all the evidences for God to be found on the Wiki page, you won't find irony listed. In fact, historically, writers have used irony to argue against the existence of God. Literary giants like Voltaire have used irony to state the alternative view. So, you could say, at the very least, it's an original book.

The book was born out of a growing conviction that the primary sustaining factor in my faith was irony. That irony had become a kind of secret pain in so many chapters of my life. A pain so intimate and seemingly-orchestrated that to see it as dumb luck or coincidence was more unlikely than any other possibility. That it hinted at the existence of God.

The book talks about this in further detail and about the way God allows irony in all our lives. In the book I call for a wider definition of the word in keeping with today's understanding. Language evolves and for many people irony today is not the strict dictionary definition. What if the real irony of Alanis Morissette's iconic song was that the lyrics really were ironic after all?

Irony can be hypocrisy, 'crazy bad luck' and even serendipity. And, to be honest, sometimes 'Crazy-bad-luck - Evidence for God' felt like a better title. But we live in post-ironic, post-truth, and post-God times - we are far too sophisticated to accept dogmas which we may have been expected to accept in the past.

If you understand, observe and think about irony in your life you will realise that most ironies are negative. So, to say that they are orchestrated by God is a big ask. It is intellectually insulting (at least, if we are to believe that God is good) to say that God has caused ironies to occur. Or worse than that, it is inhuman. So you will be able to see the spiritual gymnastics I take in order to get God off the hook for the bad ironies while still trying to defend human dignity or the remains of my intellect. After all, isn't that what being a believer is about - 1001 ways to defend God even when all reason says he is to blame? Of course, I'm trying to be ironic (or at least being disingenuous). How can irony be evidence for a benevolent God? To find that out you may need to read the book.

Without being too defensive, I'm anticipating a few possible reactions to my book. Firstly (and most likely), I'm anticipating it to be largely ignored. There is a solace in being an obscure, relatively unknown writer in that it means that I'm off the radar of most critics. So, 'Wouldn't it be ironic to totally ignore this diatribe?' is perhaps the most cruel criticism I face.

Or a worse reaction still, that the universe would have me subject to more negative irony for even daring to write about the subject. Because that's how it all works isn't it? Or that in pointing out God's apparent neglect I have somehow forgotten to toe the faith party line.

The book is written for the agnostics, the seekers, the doubters, the skeptics. It is not primarily aimed at believers or atheists (although I hope that these two groups would at least find it interesting). It is not a very long book as I tend to write shorter books, finding them easier to read myself.

I approached a handful of publishers with the work but unless one of those who ignored me offers me a contract too late (and that really would be ironic) I'm indie-publishing it since I know the process so well. The most fun rejection I had from a publisher was: ‘This is an interesting idea… clearly the Christian faith has plenty of ironies to offer, but irony is not uppermost in the day to day life of the church. I don't think our market would react with sufficient enthusiasm.'

The ironic thing is that it is a book which can help you a little to survive day to day by making progress towards a meaning to life, and pointing away from despair to hope. Surely this helps people to survive (unless Viktor Frankl was wrong about all that)?

However, you don't really need this book. It won't resolve the issue of suffering. It won't make you rich or make your tweets go viral. 'Why should I read it then?' I hear you think.

Firstly, because, you may want to know why everything is conspiring to keep you from reading it.

Secondly, because it's original and brings some fresh ideas forward.

Thirdly, because it's shiny?

This is the trailer for my first non-fiction book which should be available by Feb 2017.