A modern ghost story for halloween

Here is a story for halloween 2013. As this blog is called 'Stories Make the World Go 'Round' it would defraud you if there weren't any stories here. It is a re-write of a previous story - this version is a little darker, but without being gory. There are a few experimental techniques in which I am 'telling not showing' and using too much description (writers will know what I mean), but the general idea is to tell a modern ghost story and introduce some foreshadowing through simile and metaphor. The main story acts as a frame story to Ben's mini ghost story. The characters are supposed to be unlikable, but I'm aware that some people like the uglier characters. There are a few other techniques in there but I'll spare you the details. It is supposed to be in the line of Poe, James etc. Enjoy. 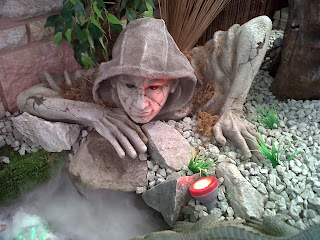 Off the shores of England there are many secluded coves. This ancient land is mysterious – and there are still mysteries which are not understood even in the harsh light of science and the dull glow of the digital revolution.
The fear the three privileged English university students felt as they sat on the beach was real enough. They huddled together surrounded by whispers, winds and shadows. And the curtain between worlds was as secure as a shroud (so they felt).
It was dusk, and the moon, now waning, cast the only comforting spell of light. It was not the only spell to be cast that night.
Ben, the unofficial leader of the group had taken them there. It had been his idea. But the fire they had planned to light hadn’t materialised. The pebbly beach wasn’t even comfortable to sit on. The driftwood was wet through from a recent downpour. It had all seemed like such a good idea at the time from the comfort of their expensive tents. The plan had been to go down to the cove, to light a fire, to tell each other ghost stories and to drink champagne. But the fire hadn’t lit and no-one could think of any stories. Besides, it was cold. It was becoming a holiday they wanted to forget.
Ben would have felt the blame emanating from the other two students if he was sensitive. But he wasn’t, he was rich, he was charming, but that was all. He stood up and looked across at the fading light. The rocks at the side of the cove seemed to silhouette eerie faces in the dusk light. Here were the chin and nose of a witch. Further along there appeared to be some kind of claw pointing towards the sky. All of the rocks were rounded from the constant erosion of the tide and wind. The whole cove was familiar with loneliness and dark nights, wise to the sea and its caresses.

“It’s too cold,” said Ellie, “I’m going back to the tent.”
The darkness of the sea seemed to saturate Ellie’s soul like a chill. The way back to their campsite and their three tents was up a set of steep steps and the pull of a warm sleeping bag was strong.

“Don’t be such a girl.” said Ben. “just listen to the sea.”
Ellie didn’t care to listen to the sea. It had become too dark and she reached for her iPhone, stood and took a picture of Ben. The flash from the camera lit up his startled face.
“I’m going to upload this to show everyone what an arse you are.”
“Do what you want,” said Ben, oblivious even to her taunt.
The waves of the sea seemed to scrape across the pebbles in the cove like a claw. The sound became more and more unnerving to the students as the waves dragged the pebbles forward and back.
“Don’t you think it sounds as if the sea is making love to the cove?”
Ben wanted to lighten the mood and he wanted to sleep with Hannah, the third student. He was willing to play along as long as he could get what he wanted. He wanted Ellie to go. He wouldn’t have minded if she had walked into the sea and not come back.
“Go back if you want to Ellie. Hannah will stay, won’t you?”
Hannah nodded but said nothing.
All Ben could think of was that he wanted Ellie to leave. He wanted Hannah to be so scared that she drew near to him so that he could hold her.
Ellie took a swig straight from the champagne bottle and sat down again. She knew what Ben wanted to do and was determined to stop him out of spite and out of the prudishness which she had inherited from her mother.
“Someone tell a story then,” said Hannah.
Ben realised it would have to be him.
“Once upon a time…” he began.
“Once upon a time – who says that anymore?” said Ellie.
“Once upon a time there was a monster named William.”
“This is crap.”
“There was a monster named William who talked to himself…”
“Complete bull…”
“Will you let me at least tell the story? Once upon a time there was a monster named William who haunted a cave in a cove on a beach very much like this one. William, was a talkative monster who often spoke to himself. All he could hear was the echo of his own voice in the cove, being a monster on his own. A lonely monster. So he would talk to himself in the middle of the night….”
“is this autobiographical?”
“…one night William the monster said to himself:” at this point Ben put on a suitably monstrous sounding voice: “‘I have seen ornaments move their heads and wink at me. I have seen dolls turn their heads. I have seen a witch the size of a giant race through a town in broad daylight…I have seen a strange, eerie creature crushed in the middle of a dark Irish road…
“Was it a leprechaun?”
Hannah looked scared and spoke for the first time, being drunk and melancholy on champagne.
“Why was the monster named after your father?”
That was when the whole atmosphere in the cove shifted - like the sudden singing of a lament. Like a turning down of the lights.

And that was when it happened.
Across the surface of the sea the three students watched horrified as a figure approach them, walking on the water.
"It's a ghost," said Hannah, standing and grabbing Ben’s hand.
"There are no ghosts!" replied Ben. Ben didn’t believe in anything supernatural. He believed in logic, reason, Dawkins and hedonism.

But it was a ghost.
Of a kind.

It came from the sea, a strange silhouette at first. It walked on the surface of the water. The only light which came from it came from its eyes which blazed red, like an old digital clock.
Its head was lowered. But as it approached, the students could see its hair moving like a black nest of snakes.
They wanted to run. All of them wanted to run, but it was as if they couldn’t, it was as if they were in a dream and they were destined to simply watch events.
The ghost spoke to them from the edge of the sea in a siren-call, like the wild song of a high wind.
"Do you think I am a manatee?"
Nobody spoke.
“Do you think I am a mermaid perhaps?”
Ben finally spoke up: ”There are no such things as mermaids or ghosts. They are myths.”
His lip quivered.
The silhouette simply stood there, the dark sea behind.
Ben continued: “We’re just trying to have a laugh."
"A laugh?" whispered the figure.

“You’re a Gorgon,” said Hannah, as if it had been revealed to her from Heaven.
The figure turned slightly allowing a slither of moonlight to illuminate what could never have been called a face. The three students wondered how providence, once so kind, could allow what was happening to them to take place. Wind swept around its snake hair.
“We are destined to make the hearts of our victims grow so very cold. We are the source of the evil-eye of folklore. We are everywhere. And we are ready now.”
Ben was secretly attempting to back away from the whole situation and was about to run. Meanwhile Ellie was fumbling for her iphone. She found the phones camera function and reversed the view. Then she raised her mobile high. Triumphantly.
The silhouette walked closer and looked at itself in the small screen of the camera. And the ancient creature smiled.
“Did you think I will turn myself into stone?” it asked.
Close up the students could see that the creature had barnacles on its skin. For a dress it wore seaweed, bladder-wrack wrapped around its body. And close up the students could see that its hair wasn’t snakes. It was eels. They writhed and squirmed, as if held their against their will.

That was when figure caught the eye of Hannah. The student felt her blood freeze as her heart turned as cold as ice and snow. Then, like snowflakes her body simply blew away in the pummel of a wind which came out from the sea.
It was beautiful. It was like a dandelion being blown. One moment Hannah had been there, the next she had turned to snow and her body blew away in a gust of flakes. The beauty of the destruction was the thing which made it so disturbing to both Ben and Ellie. It was so sudden yet so gentle.
“Where is Hannah?” said Ben, finally believing. Hannah had completely gone and there was not even a trace of her.
“I’m doing this so that a further darkness will fill your country and your kind. So that the hearts of your people will grow colder and colder. So that our kind will thrive.

And the ancient creature stood in the middle of the darkness and laughed a wild siren-song.

“Shut up! Shut up! Shut up!” screamed Ellie, flinging her phone at the creature. It missed and the light disappeared into the sea like hope dying. Ellie turned to Ben, “Do something!” she shouted.


But he was staring at the creature. And it stared back straight into Ben’s eyes.


So the land’s judgment began there. The creature caught the eyes of each student. And each of them felt their blood freeze as their hearts turned as cold as ice and snow. Then, like snowflakes their bodies simply blew away in the pummel of the coastal wind which had come.


And a further darkness filled the country, like the opening of a Pandora’s Box. As if a multitude of furies had been released from storehouses, like snowflakes, each unique. Like an army of cruel ironies, intimate and individual in their messages of death. So that the hearts of the people grew colder.


And the ancient creature stood in the middle of the darkness, knowing that morning, with her gentle mercies would never come.
Posted by Nick at 10:37