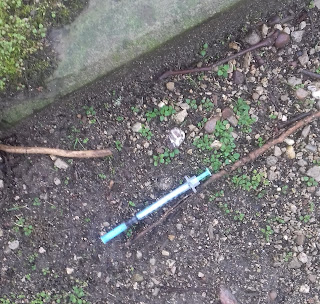 This is not the kind of revival I wanted to report. A little while ago I saw two more syringes on my work break on the streets of Birmingham. What had previously been a fairly rare experience – seeing a syringe left on the ground - has now turned into a regular sight. I was not looking for them. It feels as if drug-use is everywhere now.

I saw a man on spice standing in the street in the middle of the sunny day as children passed by. He looked like a stereotypical zombie from a George A. Romero film. It was the first time I had seen it away from the news. People walked by, even the police, and no-one seemed to bat an eyelid. That was, perhaps the worst part of it all – that we are used to it now. It would be heart-breaking if we were not so desensitised to it.

I’m not talking about cannabis use – the smell of which fills most towns and villages. I’m persuaded that Britain, as the main exporter of medical cannabis should also make it available for those suffering and for palliative care. I’m almost persuaded that cannabis should be made legal, but not quite and that is not my fight – I would not support or oppose a move like that, but I know that I can never smoke again because it would simply give me flashbacks.

I once went back to my high school to give a talk to the teenagers about the dangers of drug use. It was the one and only time I have done this. The main question I was asked was ‘Why did you take drugs?’ (even if I had limited myself to ecstasy, LSD, cannabis and amphetamines). For me the reasons were mixed – I wanted to feel better when I felt bad and I wanted to feel even better when I felt fine. So there was hedonism, there was a bit of peer pressure, escapism – and maybe mixed in with all that there was a search for some kind of spiritual meaning which I thought could be found through the use of LSD. But not much of that – mostly I wanted to feel great – to have instant mountain-top experiences, to experience life to the full. My experiment spectacularly failed, but that's another story.

And back in 1992 it all seemed a lot simpler. All of the drugs were weaker. But over the years they were rebranded and strengthened. The pictures on the acid tabs always had an anodyne strawberry or a picture of Bart Simpson – and they were designed to make you buy. These days the drugs trade is even more sophisticated and the 90's rave scene now sounds... twee.

So why did I stop taking drugs? A drug-induced psychosis may have helped, but so did a radical change in my lifestyle. I had an epiphany – to put it simply I became a Christian. Got religion – someone told me that God loved me and I believed them. Whenever I spoke about this after that time I would always say that the best way to stop taking drugs was to have a radical change in circumstances. Have a baby, get married, move somewhere new, find God. I never devoted myself to that anti-drugs task – because I don’t want it to define everything I ever do  – I wrote a few letters to papers, visited my old school and made sure that whenever anyone offered me drugs I didn’t take them. Maybe I was simply salving my conscience. But when you see the same things happening again to others, it is hard to keep shtum.

Why be silent when you spot syringes all around and you realise that there really is blood on all our streets from the heavy drug use – and its link with knife and gun crime? It’s hard to take your five fruit and veg and lower your caffeine intake when all you want to do is inject yourself with fentanyl. And why do people take drugs anyway? As I say – there are lots of reasons – hedonism, a search for something better, an escape, to relieve suffering, to enhance pleasure, to attain some kind of meaning in a maddening world. The drugs trade is always going to thrive in a world that drives people mad.

The solution, I think, is to recognise the extent of the problem and to realise that whatever we are doing now is not working. That doesn’t mean that all drugs should be legal, despite what may have happened in Portugal. But it does mean some changes. And it does mean that Government should fund and support those who are trying to tackle this huge problem. There is no good reason for cannabis not to be available for those with health problems or disabilities. Or especially for palliative care. And if the objection to that is intoxication – then why does no-one suggest that morphine should not be used?

But with harder drugs, things are worse now, making the 80’s and 90’s rave scene seem, as I say... twee. And when our blood-stained streets are littered with syringes then you know that something has to change.